White Nationalist Terrorism vs. the Young Voter of Color

The DeploraBomber. The heinous neo-Nazi shooting of Jewish congregants in Pittsburgh. The racist hate crime shooting of two Black grocery shoppers in Kentucky. And now Trump’s declaration to take citizenship away from American babies born to immigrants. White Nationalism has crawled out of hiding and is today basking in daylight, perpetrating terrorism against people of color and institutions of democracy. Terrorism is meant to scare the people. And when conducted with complicity by those in power, it is designed to scare people into submission. From lynchings across the rural South to major cities, from church bombings to massacres of entire communities, White Nationalist terror has a long history of infamy in America. Will the most recent acts of White Nationalist terror, on top of the recent spate of voter suppression and voter purges have the political effect of keeping people of color scared and away from the polls next week? 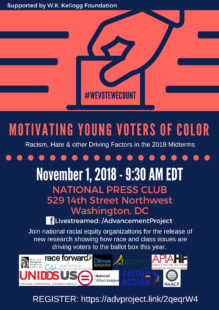 According to a recent Washington Post-ABC News poll, voter enthusiasm is up significantly among young voters of color (+24%) for this upcoming Midterm elections. What explains this dramatic increase? The W.K. Kellogg Foundation Racial Equity Anchor Collaborative, a coalition of national racial justice civil rights organizations conducted a national online poll of young (18- to 24-year-old) voters of color. The results may be surprising to all but the young voters of color themselves. On the heels of Election Day, Advancement Project’s national office talked about the results on November 3 during a briefing at the National Press Club with our allies including the Asian & Pacific Islander American Health Forum (APIAHF), Demos, Faith in Action, NAACP, National Congress of American Indians, National Urban League and UnidosUS, Race Forward.

The mainstream political narrative that young people are disengaged, don’t care about politics, can’t be bothered to vote, is wrong. Young people of color are eager for change, and while two out three find voting to be an important path to change, they place local actions, volunteering with a local organization as or even more important than voting. But they increasingly understand that the vote is a vehicle to build power and create change.

The enthusiasm for voting is not about presidential scandals, affronts, or gaffes. The results of the poll clearly indicate that the one issue young African-American, Latinx, Asian-American, and Native American voters care most about is racism and racial justice.

This is borne out in recent local elections. In St. Louis, the impact of teenager Mike Brown’s death at the hands of police officer Darren Wilson in nearby Ferguson galvanized the region and activated young people of color, not only to protest but to launch and sustain a national movement. Bob McCullough, the 28-year incumbent St. Louis County Prosecutor who made sure Wilson was not convicted, and instead charged thousands of young protestors was taken down through the ballot box by the young people of St. Louis like Kayla Reed and ActionSTL, organizing and engaging voters across St. Louis County. There’s also the young organizers in Florida that make up Dream Defenders. They are taking on the scourge of private prisons, bail reform and White Nationalism. These young leaders are channeling these goals into electoral activism. And it will be up to us to ensure that their voices get heard. That’s why Advancement Project’s Right to Vote initiative is fighting to secure an explicit, fundamental right to vote.

The respondents to the survey research expressed how they are deeply proud of their racial identities, and of how beautiful they are. Young people of color will not be cowered into submission. They are eager and willing to stand up, work hard for change, and lead the country forward toward the middle of this century when people of color will make up the majority. White Nationalism understands that only way to slow down equality and liberty for all is to keep voters of color from participating in democracy. That is why they will continue to pursue their course of violence and terror. We know that the only way to achieve racial justice is to have courage, believe in the young people and the righteousness of their path, safeguard democracy, and protect the fundamental right to vote.