Together, we did it. 1.4 million Returning Citizens have been re-enfranchised

We did it. But not without incident. But we did it!

Our organizing, litigation, public education and get out the vote efforts resulted in an historic mid-term election. We are proud of you all for getting out to vote and gathering your friends and family to do the same in the name of racial justice.

Florida residents voted in favor of state constitutional Amendment 4, which will automatically restore voting rights to 1.4 million people with certain felony convictions on their record. We have been heavily engaged in dismantling disenfranchising policies alongside our partners, New Florida Majority, SEIU, and Florida Rights Restoration Coalition (FRRC), and we did it! We are especially proud to have been supporting the Florida Rights Restoration Coalition since its beginning. 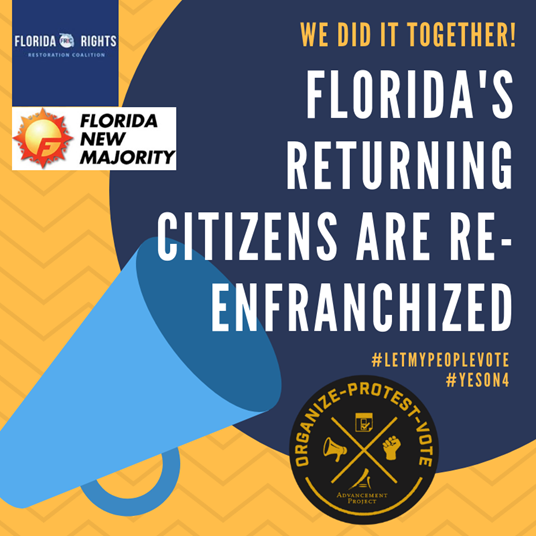 This is an historic moment for Florida – and our country. Florida voters have spoken and extended the right to vote to citizens who have been shut out. It is only fair that Returning Citizens have a say in how their schools, cities, states and country are run. Now, we must organize to ensure there is a ripple effect across the country. Read Democracy Disappeared: How Florida Silences the Black Vote through Felony Disenfranchisement, to understand the impacts felony disenfranchisement has had on Black communities in Florida. There’s work to do in other states on this issue and we need your help to make it happen. Can you help make a donation today to fund the work ahead? 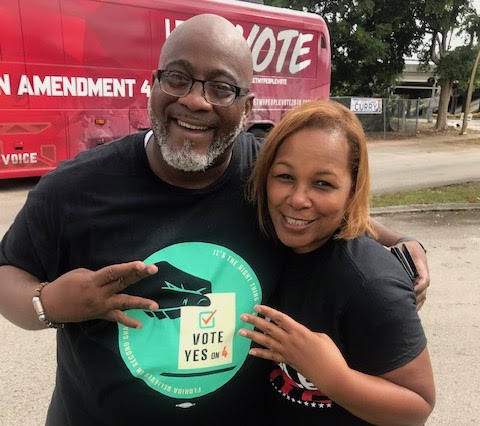 We also won two Election Day lawsuits in Missouri and Georgia. Our lawyers who were on the ground throughout Missouri were contacted by dozens of voters in St. Charles County regarding the violation of an October 23, 2018 state-wide court order preventing election officials from requiring voters to produce photo identification. We successfully filed and won the order. We were also involved in the filing of a lawsuit in Georgia that was won, leading to three precincts extending their polling hours as a result of long wait times and voting irregularities.

What’s next? It’s time to implement. Advancement Project’s national office will continue to work with partners in Florida on the implementation of the amendment, in addition to getting the word out to the Returning Citizen community on their newfound re-enfranchisement. We will also continue our right to vote campaign. Our election protection teams in Georgia and Missouri took calls and witnessed much in the way of voter suppression, confused poll workers and, to put it simply, cracks in our democracy. Voting should be easy for people. And we will continue to advocate for and work toward free, fair and accessible elections. 2020 is around the corner so stand with us as we get into action.

For today, let’s bask in these wins because together, we did it