In a disappointing 5-4 decision today, the United States Supreme Court ruled in favor of the Ohio Secretary of State in Husted v. A. Philip Randolph Institute. The majority opinion affirms Ohio’s Supplemental Process, which allows the state to remove voters from its rolls for simply not voting. This opinion follows a recent spate of cases, particularly those in the wake of Shelby County v. Holder, that have erected electoral barriers for communities of color. Although the majority of the Court voted to uphold the process, Justice Sonia Sotomayor penned an impactful dissent that warrants consideration.

Sotomayor directly cites Advancement Project’s amicus brief to reinforce the broader themes of her text. In 2012, Black-majority neighborhoods in downtown Cincinnati had 10% of their voters removed for inactivity, as compared to only 4% of voters in a suburban, majority-white neighborhood. These numbers demonstrate that Ohio’s Supplemental Process disproportionately impacts voters of color.

Before diving into the content of the dissent, let’s briefly revisit the oral argument for the case that took place a few months ago. As I noted when I attended the oral argument in January, Justice Sotomayor asked a line of questions that highlighted a number of past practices that might have discouraged marginalized voters from voting inactivity would trigger the mechanics of the Ohio Supplemental Process and lead to voters being purged from the rolls. She referred to a few policy decisions discussed in Advancement Project’s amicus brief, such as the elimination of Golden Week, that might dissuade low-income & minority voters from participating in elections at all. 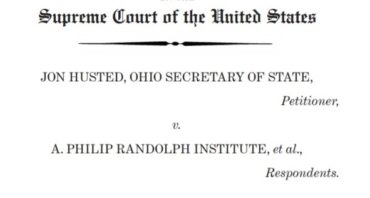 It turns out that these inquiries into the Ohio governmfent’s discriminatory policy changes directly translate into her written opinion on the Husted case. In a searing & sharp five-page dissent, Justice Sotomayor discusses the history of exclusion that has characterized the experience of voters of color. Justice Sotomayor notes that the majority fails to consider this history and distorts the text of the National Voter Registration Act & the Help America Vote Act to arrive at its erroneous decision. On the fourth page of the dissent, she directly cites Advancement Project’s amicus brief, using the example of voter purging in Hamilton County, Ohio to reinforce the broader themes of her text. In 2012, Black-majority neighborhoods in downtown Cincinnati had 10% of their voters removed for inactivity, as compared to only 4% of voters in a suburban, majority-white neighborhood. These numbers demonstrate that Ohio’s Supplemental Process disproportionately impacts voters of color.

Although today’s decision was an unfavorable one, advocates will continue to fight to ensure that all voices, especially ones that have been historically excluded, are counted in future elections.  Especially in states like Georgia – ones that have similar removal processes to Ohio’s – organized communities will remain vigilant in the fight for full power & democracy. Advancement Project stands with our community partners to achieve this goal. Our contributions to this fight have never been more imperative.