Today, Voice of the Experienced (VOTE) filed its application to the Louisiana Supreme Court on VOTE v. Louisiana, which seeks to end Louisiana’s unconstitutional disenfranchisement of citizens on probation or parole. With today’s filing – and with Advancement Project’s national office serving as national counsel – this historic case is officially in the hands of the Louisiana Supreme Court. Today’s application urges the Supreme Court to hear this case due to its serious constitutional implications for tens of thousands of citizens on probation and parole in the state and to affirm the fundamental right to vote for all Louisianans.

“Today’s filing marks one more milestone for VOTE, our members, and everyone resisting against an out-of-control criminal ‘justice’ system,” said Norris Henderson, Executive Director of VOTE. “We envisioned this case while some of us were incarcerated. After organizing, growing, and building power for years, today we affirm our political voice before the Louisiana Supreme Court. The state needs to make good on the promise of the right to vote we have based on the Constitution.” 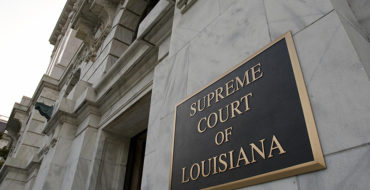 “The judges seeing this case so far are upholding a law that we know is unconstitutional,” said Bruce Reilly, Deputy Director of VOTE. “The Louisiana Supreme Court is best positioned to correct this, and proclaim once and for all that the Louisiana Constitution guarantees the right to vote, and that voting can only be suspended during, not after, incarceration.”

This historic law is made possible by the historic years-long efforts of hundreds of formerly incarcerated people and their loved ones coming together to urge state representatives to defend democracy.

In a March 2017 ruling granting summary judgment to the state in this case, 19th Judicial District Judge Tim Kelley said that, even though he was ruling against plaintiffs, he thought this was unfair. VOTE appealed the ruling to the First Circuit Court of Appeal, arguing that the Constitution explicitly guarantees the right to vote to all people who are not “under an order of imprisonment,” including those on probation and parole. With a partial dissent, the appeals court sided with the district court, clearing the way for today’s appeal to the Louisiana Supreme Court.

“People should be given second chances, maintain their political voice and the opportunity to choose those who represents them,” said Judith Browne Dianis, Executive Director of Advancement Project’s national office. “Because of organizations like VOTE, we are seeing broad, sweeping criminal justice reform across the country. Still, too often the voting rights of people ensnared by the criminal justice system are left behind. People on probation and parole should have their right to vote restored. Louisiana’s constitution, unlike the Federal Constitution, affirms an explicit fundamental right to vote. The court below failed to give weight to this fundamental right, and that is why we take our case to the Supreme Court today.”

The claim to the right to vote made in VOTE v. Louisiana enjoys overwhelming support from influential voices who have filed amicus briefs in the case. Legal scholars from every law school in Louisiana have expressed their support for the merits of the lawsuit. Historians from Louisiana added incisive historical analysis showing that recognizing the right to vote is long overdue. Importantly, the American Probation and Parole Association, which represents 700 probation and parole officers in Louisiana alone, is strongly in favor of recognizing the right to vote as claimed by VOTE. Whalen Gibbs, a longtime Louisiana public servant, probation officer, and a former assistant secretary with the Louisiana Department of Corrections who oversaw reentry work, publicly expressed his support through an op-ed in the Times-Picayune. The NAACP Legal Defense and Educational Fund, Inc. (LDF), The Sentencing Project and the Southern Poverty Law Center have supported the case with important racial, historical and legal context that cannot be separated from what this case means to the community.

VOTE secured a key victory this year in ratification of Act 636, which restores voting rights sooner to some people on probation and parole. While a significant step forward, the law is also only a partial restoration – tens of thousands of parolees and probationers are estimated to remain disenfranchised even the new law goes into effect next year.

Through VOTE v. Louisiana, VOTE seeks to affirm the right to vote for more than 70,000 people who are not incarcerated, but living under community supervision (i.e. probation and parole) as our neighbors, family members, and co-workers.

Louisiana denies the right to vote to people behind bars. It also bars from voting 40,000 people on probation, along with 30,000 citizens who have returned to their communities on parole. Each year, thousands of people are removed from this list while thousands more take their place, as Louisiana has more police and prisons per capita than anywhere in the nation.

VOTE is a grassroots organization founded and run by formerly incarcerated people (FIP), our families and our allies. We are dedicated to restoring the full human and civil rights of those most impacted by the criminal (in)justice system. Together we have the experiences, expertise and power to improve public safety in New Orleans and beyond without relying on mass incarceration.