Washington – Today, after a years-long fight, Voice of the Experienced (VOTE), a grassroots group started and led by formerly incarcerated people, scored an historic victory with the passage of HB 265, a rights-restoration bill, in the Louisiana State Senate. HB 265 was already approved in the Louisiana House of Representatives.

“So much of the criminal justice system exists to deprive us of our humanity,” said Checo Yancy of VOTE. “This bill restores a little of that humanity. The path to this victory has been long and hard, but we are proud of our members and everyone who showed up in support. This moment is decades in the making, but it has been well worth the fight. Ultimately this is about our voice, our citizenship, and what that means to ourselves and our families.”

“People should be given second chances, maintain their political voice and have the opportunity to choose those who represents them,” said Judith Browne Dianis, Executive Director of Advancement Project’s national office. “At a time when there is momentum in favor of criminal justice reform, VOTE’s success shows that this work can and should be done under the leadership of directly-impacted people. Envisioned while its founders were still behind bars in the heart of the world’s incarceration capital, VOTE has led the way to historic grassroots-led reforms. At Advancement Project we are proud to support VOTE, from the streets to the legislature to the courts.”

Following reconciliation of the Senate’s amended version with the House version, the bill will go to Governor John Bel Edwards for his signature. 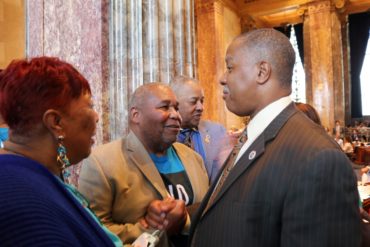 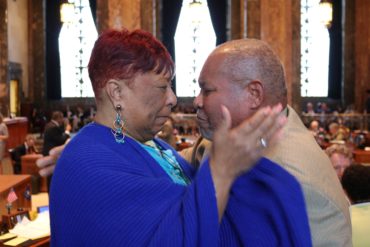 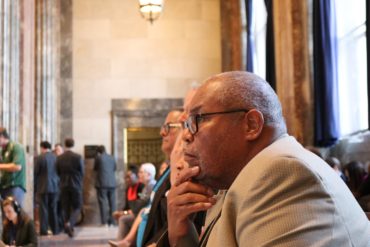 Checo Yancy, of VOTE, fought for passage of HB 265. He is pictured in the Senate before and after the victory.HB 265 would reduce the time people on probation and parole for conviction of a felony would have their voting rights suspended. It would restore voting rights to people on probation who have not violated its terms and those on parole who have not been incarcerated for the past five years.

Currently, people in Louisiana with felony convictions cannot vote while they are on probation and parole – more than 72,000 people statewide. [Nationwide, more than 6 million people cannot vote due to a felony conviction – more than three-fourths of whom are not in prison]. Advancement Project’s national office is counsel on VOTE v. Louisiana, a lawsuit seeking to have the state of Louisiana recognize the right to vote, which is written into its constitution, and allow those on probation or parole to vote.

Voice of the Experienced (VOTE) is a grassroots organization founded and run by formerly incarcerated people (FIP), our families and our allies. We are dedicated to restoring the full human and civil rights of those most impacted by the criminal (in)justice system. Together we have the experiences, expertise and power to improve public safety in New Orleans and beyond without relying on mass incarceration.