On Day of VOTE v. Louisiana Oral Arguments, VOTE Members Reclaiming their Right to Vote Will Hold Events at LSU

Dozens of Statewide Members of Voice of the Experienced (VOTE) Hold Teach-in and Press Conference, Attend Oral Arguments on Their Right to Vote 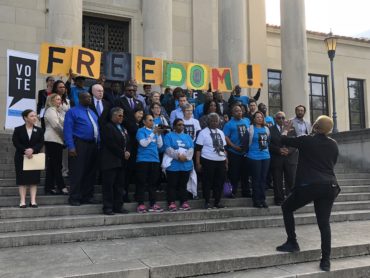 Baton Rouge – Today, Tuesday, February 27th, the Louisiana Court of Appeal for the First Circuit heard oral arguments on VOTE v. Louisiana, the case brought by formerly incarcerated people living and working in communities throughout Louisiana to reclaim their right to vote. Just before oral arguments, dozens of members of Voice of the Experienced, the organization bringing the case, held a teach-in and spoke out on why their right to vote should be recognized by the court.

The case could result in more than 70,000 Louisianans – neighbors, community members, and citizens who are on probation or parole – recovering their right to vote. As part of its case in court, VOTE argues that suspending Louisiana’s right to vote for people on parole and probation goes against the state’s constitution’s express guarantee of the right to vote.

“We are parents, grandparents, adults, and children,” said Felicia Smith, a VOTE member and co-captain of the organization’s chapter in Shreveport. “Showing my daughter that her mother overcomes obstacles and is not defined by one single instance means everything to me. My fight for my right to vote is part of that. To me, the right to vote is about proving that I am someone.”

VOTE is a New Orleans-based, member-driven, grassroots non-profit organization by and for formerly incarcerated persons and their families. In VOTE v. Louisiana, VOTE contends that the Louisiana Constitution guarantees that individuals who live and work in their communities on parole or probation, and that these people should be permitted to have a voice in their community’s political life.

“The language on the Louisiana Constitution is clear: We have the right to vote,” said Norris Henderson, Executive Director of Voice of the Experienced. “With the right to vote we have our voice. We are neighbors, community members, and citizens. We work and we pay taxes. We all care about the communities we live in, and the schools where we send our children. If we can’t vote, then politicians are making decisions about us without us. We think the court will agree that not only is this unconstitutional, but it’s just not right.”

The national office of Advancement Project, a civil rights and racial justice organization that works on the right to vote, is lead national counsel on VOTE v. Louisiana.

“The right to vote is sacred – it is the right that protects all others,” said Judith Browne Dianis, Executive Director of Advancement Project’s national office. “From Louisiana to Florida, Virginia and beyond, the tradition of silencing people even after being behind bars can be traced directly to efforts to silence people of color. VOTE v. Louisiana is part of a pushback from impacted people to not only diminish those disparities, but to build power so that communities can take down barriers to living whole lives.”

Today’s oral arguments to the court were presented by veteran civil rights lawyer Loyola Law Prof. Bill Quigley. “The 1974 Louisiana Constitution guaranteed the right to vote to all citizens of this state,” Quigley argued to the court. “Two years later, the legislature illegally and unconstitutionally took that right to vote away. This case seeks to restore the constitutional right to vote for more than 70,000 people in this state.”