Oral Arguments Week: Supporting the Right to Vote in Louisiana

This is part of our case, VOTE v. Louisiana, where Advancement Project’s national office is supporting Voice of the Experienced (VOTE), a grassroots group founded by and for formerly incarcerated people, arguing that depriving people on probation and parole from voting violates the fundamental right to vote.

“We are parents, grandparents, adults, and children. Showing my daughter that her mother overcomes obstacles and is not defined by one single instance means everything to me. My fight for my right to vote is part of that.” Felicia Smith, a VOTE member and co-captain of the organization’s chapter in Shreveport

In Louisiana, the nation’s incarceration capital, VOTE is paving the way for the rights of the formerly incarcerated. In our role as lead national counsel in VOTE’s lawsuit, we went to Louisiana this week for oral arguments on our case.

Several formerly incarcerated and directly impacted people living and working in communities throughout Louisiana shared stories about their reentry process and how voting would help them to further reintegrate into their communities.

We heard from people like Ms. Felicia Smith, a leader who is co-captain of VOTE’s emerging chapter in Shreveport. Ms. Smith said, “Showing my daughter that her mother overcomes obstacles and is not defined by one single instance means everything to me. My fight for my right to vote is part of that.”

Ms. Felicia speaks with member of the media on why the right to vote is important to her.

We also heard from Curtis Davis, also a Shreveport leader, who stressed the importance of the right to vote if one is to really have a voice and make a difference in the community:


At a teach-in alongside VOTE members, they did community education and organizing around the right to vote in the state. 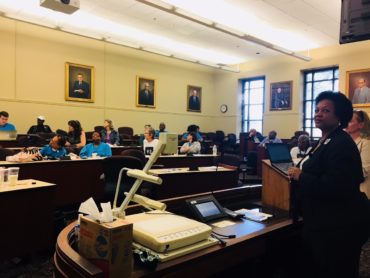 VOTE v. Louisiana could result in the restoration of voting rights for more than 70,000 Louisianans who are on probation or parole. We are making clear that suspending the right to vote for Louisiana residents on parole and probation goes against the state Constitution’s express guarantee of the right to vote.

Weakening the right to vote is how opponents of voting rights have, for generations, sought to weaken the political voice of communities of color. We are proud to be in solidarity with VOTE and making a stand for the right to vote.

Make sure you stay up to speed on our right-to-vote work in Louisiana by visiting our Louisiana page on this website – and be sure to check out and support VOTE. This is just one chapter in the fight – we are in this for the long haul.