Dolfinette Martin: a Leader of the Here and Now

The visibility of Black women and their political power has recently made it into the mainstream discourse as if it were a new phenomenon. It’s a complex development that is both insulting, yet long overdue in recognition. On the other hand, Black women have always relished in the strength of their communities, and families with a strong sense of justice. Black women have long been aware of the ways in which the world has sought to demonize and oppress their political power. It’s this legacy that Dolfinette Martin, statewide organizer with Voice of the Experienced (VOTE ), rises from.

The backdrop of sisterhood and justice led Martin, Louisiana, to organize the first statewide march for incarcerated women and girls. She needed to give voice and visibility to this community of the often-forgotten casualties of mass incarceration. 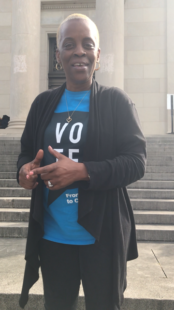 Dolfinette Martin on the steps of the LSU Courthouse before VOTE V. Louisiana Oral arguments

In her role with VOTE, a grassroots organization founded and run by formerly incarcerated people that builds power in the community, Martin serves as an advocate for the rights of incarcerated and formerly incarcerated people. After serving time in St. , a Louisiana women’s prison known for its unjust living conditions, Martin personally faced the challenges of reentry. Now that she has reintegrated into her community, she advocates to for a better reentry process.

“Those who are closer to the problem are also closer to the solution,” said Martin, fully mindful of the importance of centering her work on those most directly impacted. “If we are going to have the conversation about women and girls and incarceration, then we need to hear those who have experienced those things.”

This is one of the many central principles of VOTE’s work.

VOTE’s mission is to “restore the full human and civil rights of those most impacted by the criminal (in)justice system.” The organization’s Louisiana Campaign for Democracy (LCD) aims to raise the awareness of voting rights for formerly incarcerated people. In Louisiana, individuals are eligible to vote if they have completed parole or if they are on probation. Martin was one of the people that VOTE’s campaign helped. She is part of the group of people who, after waiting 20 years under supervision, was able to get their rights restored. Today, she works to inform others about the power of the vote in communities of color.

On July 2016, the Louisiana Campaign for Democracy expanded when VOTE filed a lawsuit, VOTE. V. Louisiana. The case challenges Louisiana’s denial of the right to vote for more than 70,000 people who are no longer imprisoned, but are on probation or parole. In February, the courts heard oral arguments from VOTE with Advancement Project as lead national counsel on behalf of these neighbors and community members who are left voiceless at the ballot. The first opportunity for a court decision of this monumental case fell near the 50th anniversary of the assassination of Dr. Martin Luther King. One week later, the court denied VOTE’s challenge to this case. His words in the struggle for voting rights resonates louder today:

“So long as I do not firmly and irrevocably possess the right to vote I do not possess myself. I cannot make up my mind — it is made up for me. I cannot live as a democratic citizen, observing the laws I have helped to enact — I can only submit to the edict of others.” Martin Luther King Jr. (1957)

Dr. King’s words ring loud to members of the Louisiana community who live and work as model citizens in their communities waiting for their vote to be unchained.

As a bold leader in the state of Louisiana, Martin has moved with tremendous purpose. That’s why women like her are the leaders of the here and tomorrow. Black women like Martin have long been the backbone of the movement and in a country where we are still learning about the contributions of the “hidden figures” who built this country. Join us as we pay tribute with to Dolfinette Martin and those who continue to work tirelessly to pay it forward.