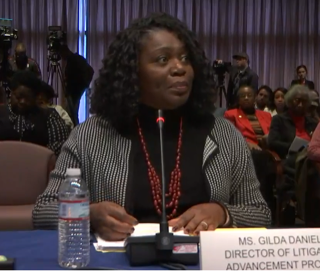 On February 19, Advancement Project’s National Office traveled to Atlanta to testify at the Congressional Committee on House Administration’s field hearing on voting rights and elections. Long story short? Gilda Daniels, Advancement Project’s Litigation Director blasted state officials for a litany of issues that systemically and disproportionately disenfranchised communities of color and the poor.

“Georgia, in particular instituted a number of retrogressive and arguably discriminatory practices such as:

Daniels quipped, “It is easier to buy a gun in Georgia than it is to vote.”

“Prior to the dismantling of the Voting Rights Act, Section 5 would have required Georgia and its sub-jurisdictions to seek preclearance prior to implementing these changes. If Georgia had been subject to Section 5, many, if not all of these practices would have never been introduced. Without Section 5, civil rights groups and individuals face the costly task of litigating voting practices after they have adversely affected communities of color.”

Daniels recounted her election experience on election night. “At the Pittman Park voting station, we received calls that lines were reportedly 300 people deep with a wait time of 3.5 hours.  Long lines and broken or inoperable voting machines…led to people getting turned away or given provisional ballots.”

Nse Ufot, a #FreedomFighterWarriorQueen who serves as Executive Director of New Georgia Project, a key Advancement Project voting rights partner, also made an insightful commentary. “One thing that should be clear is that opponents of voting rights piloted voter suppression tactics in 2018 and intend to take them to scale for 2020.”

So what’s the solution? Restoring federal oversight of voting changes and an creating an explicit affirmative right to vote in the Constitution. Congress is now considering H.R. 1, the For the People Act, which would reduce barriers to the ballot box, and will later take up legislation restoring the Voting Right Act of 1965.

The voting rights legend and Georgia Congressman, John Lewis, also attended the hearing, deftly summed up a vision for voting across the country. “Voting should be as simple as getting a glass of water. We must make it happen.”

We agree. And we won’t stop fighting until it does.